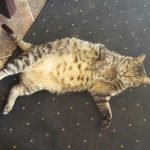 Sylvestor still offers so many

So many clients have asked how Fat Cat Sylvestor is doing and if he is still lounging about.

Originally during the renovation period we noticed the cutest kitten. However he would appear and then disappear for days on end. It was only after that the Bed and Breakfast was opened for a few months that we once again saw the same now cat. As time past and he realized that this new home offered a good few pats, scratches and most importantly free food that Sylvestor the cat moved in. Not into the home but rather outside as he was still a wild cat.

It would seem that some special treats not available locally have surely made their mark on this funny cat, as the time intervals between seeing old Sylvestor increased. To date Sylvestor it would seem receives free lodging and all meals on the house. He has taking to the outside veranda as being his personal spa area especially when it is to hot to go insearch of what ever it is that cats do during the day. No he would rather spend the day lounging about in the hope of a good scratch and off-course a tasty treat.

He now officially go's by the name of Fat Cat Sylvestor or move over Sylvestor this cat has such a tremendous personality with maybe a naughty sense of humor (who knows). From that little kitten that was so shy to lying infront of your feet and ensuring that if anyone is getting attention then it would be Sylvestor.

After numerous emails from past clients wanting to know how Sylvestor is we would firstly like to thank you for allowing Sylvestor to roam the grounds. Sylvestor is not allowed in doors and he has shown no interest in venturing inside.

Sylvestor is just as relaxed and taking it a bit easier at the moment as it's summer and we all know that he's not the exercise type.

Once again an enormous thanks to everyone that enjoyed having Fat Cat Sylvestor around.

All rooms are stylishly decorated for you're comfort.

READ MORE
← At Heritage House Bed & Breakfast St Lucia South AfricaClients on Safari →
Scroll To Top
Open chat
1
Powered by
Welcome to At Heritage House, did you know we are running a special? Please let us know if we can assist you.